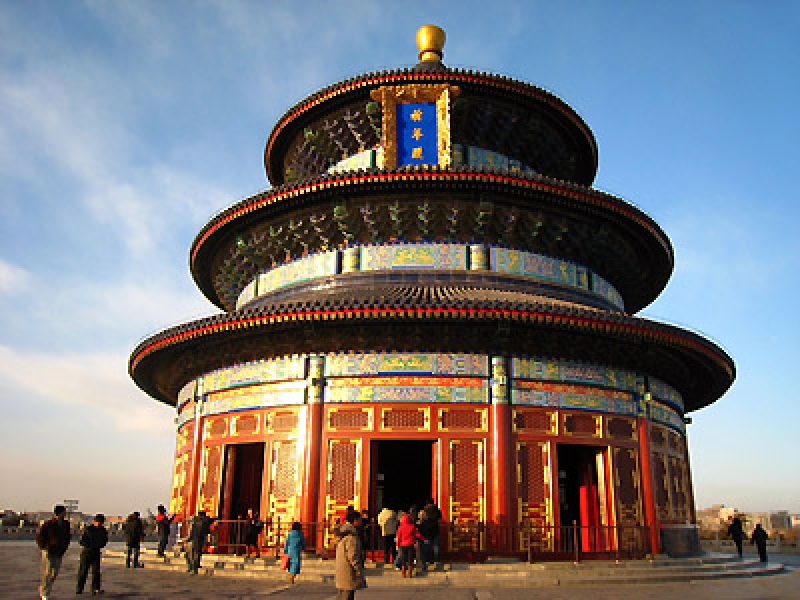 Temple of Heaven is located in the south-east of the Forbidden City. It covers an area of 273 hectares which is four times larger than the Forbidden City. It was used to hold a memorial ceremony for the God in Winter Solstice Festival and to pray for harvest in the first month of the lunar year by the emperors in Ming and Qing dynasties. It is China's existing largest structure for sacrifice to heaven.

The Temple of Heaven in Beijing was included in the World Heritage List in 1998. About the World Heritage Committee on the evaluation of the Temple of Heaven: Beijing Temple of Heaven was built in the first half of the AD 15th century. It is located in the royal gardens and surrounded by ancient pines. It is well-preserved Altars buildings. No matter in the whole layout or individual building, it reflects the relationship between heaven and the earth, and this relationship occupied a central position in the ancient Chinese cosmology. At the same time, these buildings reflect the emperors' unique role in this relationship.

►The reasons for the World Heritage:

1) The Temple of Heaven is one of the accumulation of the Chinese civilization.

3) Temple of Heaven collects ancient philosophy, history, mathematics, mechanics, aesthetics, ecology together, it is the masterpiece of ancient times.

History of Temple of Heaven

According to historical records, the history of ancient Chinese activities of formal worship heaven and earth can be dated back to the second millennium BC, which was in the Xia Dynasty. Ancient Chinese emperors claimed to be the "Son of Heaven", they extremely respected the heaven. The history of each emperor regarded as a very important political activity of sacrifice the heaven and earth. And the worship building played a decisive role in the construction of imperial capital. They would concentrate manpower, material and financial resources to build to the highest technical level and the most perfect building.

Temple of Heaven has the layout of the rectangular-ambulatory-plane, consisting of two altar wall which is divided into the inner altar and the outer altar. The outside altar wall has the total length of 6416 m and the inner wall has the total length of 3292 m. The southernmost wall is square which symbolizes the earth, the most northern wall is semi-circular which is a symbol of the heaven. High in the north and low in the south means high in the heaven and low in the earth, also means orbicular sky and rectangular earth.

The main building of the Temple of Heaven focuses on the northern and southern ends of the altar in the axis, which is linked by a wide Danbi Bridge; and from south to north, there is the Circular Mound Altar, Imperial Heavenly Vault, etc. which are cleverly designed and superbly constructed.