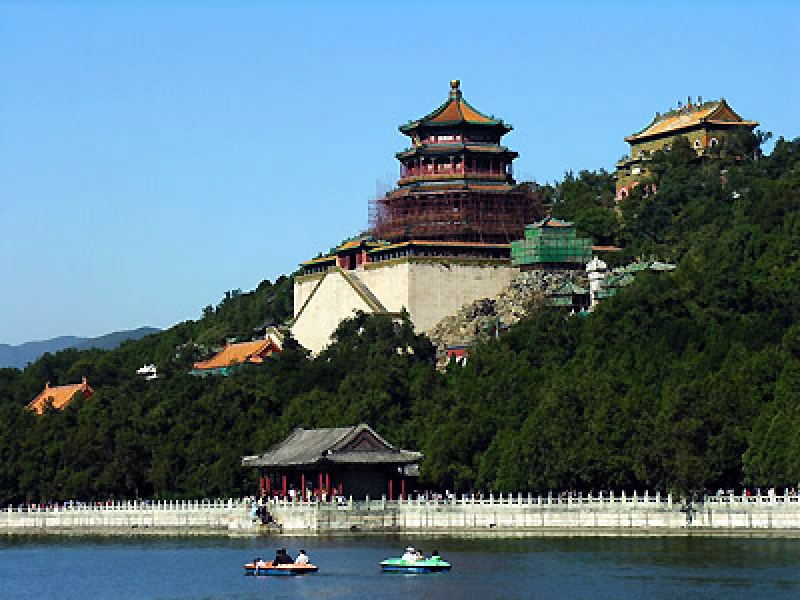 Time for a Visit:about 1.5 hour

Off season（November to next March）

Subway Line 4: get off at Beigongmen Station (North Palace Gate).

The Summer Palace is China existing largest and best preserved imperial garden, also is one of the four famous gardens in China (the other three are Chengde Mountain Resort, Suzhou Humble Administrator's Garden, Suzhou Lingering Garden). It is a large natural landscape garden which used Kunming Lake and Longevity Hill as based address, modeled on the Hangzhou West Lake scenery, drew some design techniques and the mood of the gardens on the yangtze delta. It is also the best preserved royal palace, known as the Royal Garden Museum.

Summer Palace became the most important political and diplomatic activity center outside the Forbidden City for the supreme ruler in late Qing Dynasty. It is an important witness of the modern history of China and it is also the locality of many major historical events.

In 1898, Emperor Guangxu met Reform thinker - Kang Youwei in the Renshou Hall in Summer Palace to inquire political reform; after the failure of Hundred Days' Reform, Emperor Guangxu was put under house arrest in Yu Lan Tang in the garden for a long time, since, the Summer Palace was said to be the most luxurious prison.

In AD 1900, the Summer Palace again suffered the loot by the Eight-Power Allied Forces, the following year, the Empress Dowager Cixi returned to Beijing from Xi'an, once again utilized the large sums of money to fix this palace. In 1924, the Summer Palace was turned into a park which is opening to the outside world.

Summer Palace is a large-scale park, covering an area of 2.97 square kilometers (293 hectares), of which the water surface accounted for three-quarters (about 220 hectares). The park mainly consists of Longevity Hill and Kunming Lake.

Summer Palace has the Tower of Buddhist Incense as its center. It has more than 100 sightseeing buildings, more than 20 large and small courtyards, 3555 ancient buildings, which totally covers an area of over 70,000 m². The park has a total of more than 3000 pavilions, table, floor, corridor, shed, etc. more than 1600 old tree and famous wood species. Among which, the Tower of Buddhist Incense, the Long Corridor, Marble Boat, Suzhou Street, Seventeen-Arch Bridge, Garden of Harmonious Interest, etc. have become well-known typical construction.

The Summer Palace is full of magnificent momentum of Chinese royal gardens, and also full of interest of nature. It collected the great achievement of the traditional gardening art, used the Longevity Hill and Kunming Lake as the basic framework, borrowed landscape environment around the scenery. The artificial landscape like the pavilions, long corridor, halls, temples, bridges along with the natural mountain and wide lake are harmonious with each other and fused together artistically. The entire garden reflects clever artistic conception, is the set of the the a masterpiece of the Chinese garden architectural art. It has a significant and impressive status in the Chinese and foreign history of garden art.

The main attractions in the park is divided into three regions: the solemn and majestic Hall of Benevolence and Longevity is regarded as the representative of political activity area which was the main place for the internal affairs, diplomatic and political activities by Empress Dowager Cixi and Emperor Guangxu in late Qing Dynasty; the courtyards like the Le Shou Tang, Yu Lan Tang, Yi Yun Museum are the representative of the living area which is the place of residence for Empress Dowager Cixi, Emperor Guangxu and his imperial concubines. The Longevity Hill and Kunming Lake are regarded as the representative of the scenic area.