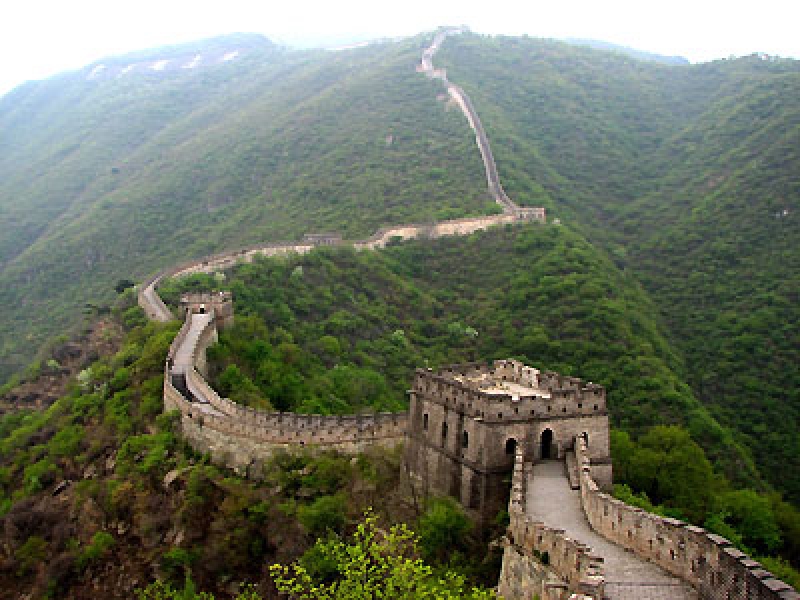 It is connected with Jiankou in the west and Lianhuachi and Jinshanling in the east. In 1569, the Mutianyu Great Wall was rebuilt, mainly with granite and is one of the best-preserved sections with the largest construction scale and best quality among all sections of Great Wall, being 7-8 meters high and 4-5 meters wide with 22 watchtowers on this 2,250-meter-long section. It served as the northern barrier defending the capital and the imperial tombs.

There are 22 watch towers distributed at close intervals along the wall. They are located not only in the main wall but also at the distinctive 'branch cities'. Branch cities are built on the hill ridge against the inner or outer side of the wall. They measure from several yards to dozens of yards across. On the northwest over 3,281-feet hills, lies a section of the wall called 'Ox Horn Edge'. On the steep and lofty peaks, there are two walls named 'Flying Eagle Flies Facing Upward' and 'Arrow Lock'. What is more rarely seen on the southeast side is a general gateway platform guarded by three watch towers together. In locations of strategic importance, batteries are set up to reinforce the defense capabilities. Mutianyu Great Wall really deserves to be the archetype of the ten thousand li Great Wall.

Built mainly with granite, the wall is 7-8 meters high and the top is 4-5 meters wide. Compared with other sections of Great Wall, Mutianyu Great Wall possesses unique characteristics in its construction

1. Watchtowers are densely placed along this section of the Great Wall - 22 watchtowers on this 2,250-meter-long stretch.

2. Both the outer and inner parapets are crenelated with merlons, so that shots could be fired at the enemy on both sides - a feature very rare on other parts of the Great Wall.

3. The Mutianyu Pass consists of 3 watchtowers, one big in the center and two smaller on both sides. Standing on the same terrace, the three watchtowers are connected to each other inside and compose a rarely seen structure among all sections of Great Wall.

It opens to the public all year around.

The best time to visit China Great Wall is in Spring and Autumn, especially in April, May, September or October, when has good weather and moderate climate.

Now, Mutianyu Great Wall is a world-famous great wall section in Beijing. To offer more convenient to the visitors, there are three ways of ascent and four ways of descent to choose from. Except for the 4000 steps in the great wall, you can also take a two-rider chairlift or four-rider gondola up from the foothills to the top of the wall. They run long the ridges above. As for descent, you may use the above ways to do it, but you may also single-rider personal wheeled toboggan to descent, which allows single riders to descend from the wall to the valley on a winding metal track.